skip to main | skip to sidebar

I think crop circles are incredible - not just because they're mysterious, unexplained phenomena, possible with spiritual or alien involvement - because they are really amazing works of art. Look at the intricate designs, and you know they are actually really huge!

You can see a whole bunch of pictures as well as a discussion about their nature here: Aliens and Crop Circles.

If you'd like to know more about crop circles here's a great new movie produced and directed by Suzanne Taylor: "What On Earth? Inside the Crop Circle Mystery."

This 81-minute documentary follows Suzanne on her visit to England, where she interacts with people who have had deep experiences in relationship to crop circles. They discuss about how their lives have changed as a result of this phenomenon. She meets artists, scientists, mathematicians, philosophers, farmers and others - a broad spectrum of people who have the common goal of learning about and from the amazing phenomenon of crop circles.


And now it's crop circle season for 2010. Although April had no reports, already two crop circles have been reported in May, 2010 in Wiltshire, England: the first by Old Sarum near Salisbury and the second right beside Stonehenge. And they're both quite beautiful!

You can check out the latest crop circle reports on Crop Circle Connector. The photos are amazing!
Posted by Jennifer Tanabe at 2:49 PM No comments:

Here's one of my favorites - Stonehenge. In this photo, the setting sun casts an eerie glow over the stones. As if Stonehenge wasn't already an amazing enough sight at any time of day! 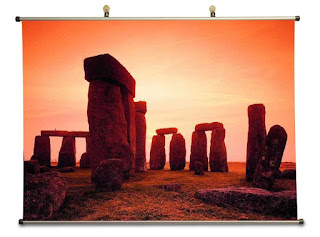 Stonehenge, which is located in a nice peaceful area of the English countryside, is one of the most amazing structures in the world. Of course, it's not complete any more; many of the stones have fallen. But you can still see how magnificent it was. There are still trilithons of huge stones, with a large horizontal stone resting on the huge vertical pillars, and it seems like there was an altar in the center.  The immense size of the stones, and the way the monument is constructed, not just forming a circular ring, but with stones aligned in relation to sunrise and sunset at the solstices, definitely is awe inspiring. How much effort it must have taken to construct this masterpiece! Now, if we only knew exactly what the builders had in mind when they designed and constructed it.


Stonehenge has apparently been "decoded" by several scientists, but not conclusively and not with mutual agreement. It is the mystics, those who return to the olden Druidic view of life, and the New Age spiritual people, and artistis with similar sensitivities, who seem to be in tune with this place. And maybe that's OK for now - understanding mythical places involves more than just physical science, it needs to include the realm of spirit.

If you want to see some amazing artwork that is based on Stonehenge, check out this article:
Stonehenge Pictures.
Posted by Jennifer Tanabe at 3:26 PM No comments:

Jennifer Tanabe
I'm an academic type - got my B.S. in Biological Sciences and Ph.D. in Psychology from the University of Edinburgh in Scotland. Yes, I was born a Brit! I was also a postdoctoral fellow at the University of Minnesota's Institute of Child Development for a year. Since then I've had a varied career and currently live in the Mid Hudson Valley of New York State with my husband and 3 cats. The one in the photo is called Leo, same as my zodiac sign! I'm still interested in Psychology, added a spiritual/parapsychological focus with my involvement in spiritual activities. I'm married to a Japanese guy, and we have a daughter who's currently in college. They're both very musical and artistic, hopefully some of that rubs off on me! If you're interested, check out some of my husband's art (buy it even!) at the Misticmedia storefront on zazzle.

I am an affiliate of Allposters.com and will receive a small commission from any sales generated by this blog.

I am an Amazon associate and will receive a small commission from any sales generated by this blog.

I am a Zazzle Associate and will earn a small commission from any sales generated from this blog.